Frédéric Deprun was born in 1968 in Versailles, France. He currently lives and works in Lyon.

For over 15 years, the artist has devoted himself to a pictorial and poetic work that has been distinctly figurative. The artist invites the viewer to discover his allegorical paintings through comedy sketches with plenty of figures and toys. His style is classified within a tradition of technical means by the usage of conventional tools: oil paintings and canvas. His painting is meticulously carried out through plastic organisation, in opposition to certain recurring themes in a sort of personal mythology.

There is no concept to defend or aesthetic barrier to break or overcome in his work. When he paints, he just thinks of the image that he’s building up and of the playground marked with certain anchorage points that successfully do their work thanks to the subsequent experiments. Frédéric Deprun is very much attached to the creation process: he makes his own comedy sketches in the middle of nature (in the countryside, by a pond, in the forest…), and elaborates all the stage production in his studio with artificial lighting, which allows him to create a polymorphous universe in constant evolution. Thus, his painting is conceived as a kind of hyper receptivity of what the initial elements may have produced, a sketch that precedes the actual attainment finished up on the canvas.

Therefore, his painting is often exposed as a framed diorama, a kind of box in which the plans are overlapped without any depth of field. The attention paid by the artist for numerous details allows him to create emotional contrasts with themes he’s obsessed with: children, family, miniatures, relationships with others (strangers). The integration tools of the figures present in his artistic settings are key elements to understand he artist’s direction. Frédéric Deprun considers each of his works to be the reflection or prelude to a twisted drama or, in opposition, the representation of a space that returns to normality. 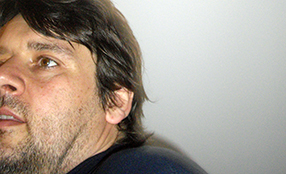